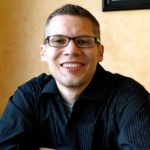 Dillon Burroughs is one of my very good friends. He is the author of way more books than you can count, including his latest [amazon ASIN=”0736921214″]What Can Be Found in Lost[/amazon]? He is on staff at the Ankerberg Theological Research Institute, working with renowned apologist John Ankerberg on many important books addressing current issues from a Christian worldview.

I have always known Dillon to be a thoughtful observer of the culture and a rock-solid apologist for the Christian faith. A graduate of Dallas Theological Seminary, Dillon is married to his lovely wife Deborah and they have three children.

1) You work for John Ankerberg, who produces a terrific show and has written many books on apologetics and worldview. Tell us a little bit more about this ministry and a bit about what you do.

It’s an amazing ministry that pioneered the use of television to teach Christian worldview. It now reaches into over 180 countries on television, airs a daily radio program on over 700 outlets, and is known as a key place for people looking for information on presenting and defending the Christian faith. I’m honored to serve alongside Dr. Ankerberg and many of the guests who appear on our program, ranging from Lee Strobel, Dr. Gary Habermas, Dr. Norman Geisler, and many more.

2) You’ve spent a lot of years writing, researching, and speaking on Christian worldview as it relates to the culture. In your view, how does our generation view truth and spirituality and how should Christians speak to this culture?

Outsiders unfortunately see evangelicals, political conservatives, and extremists who want to overthrow the government as all being part of the same religious freak show—people to be avoided at all costs. Yet at the same time, spirituality is increasing accepted as a important part of culture. A major part of my work is helping people who call themselves “spiritual but not religious” see that the true, biblical Jesus is only one who will satisfy their longing for spiritual relationship based on unconditional love. It’s basically Ephesians 4:15, “speaking the truth in love.”

On the other extreme, many conservative, Bible-believing Christians are overwhelmed by culture and not sure what to do, sometimes calling all cultural changes bad. But Jesus was a friend to sinners and lived among ordinary people, yet continue to teach and live truth. That’s the dynamic I seek to live and promote, learning all I can and communicating it to others along the way.

3) Besides your own books, you’ve done an enormous amount of collaborative writing. What has this experience been like? How do you balance your writing style with the voice of your collaborator?

Every project is different! There is no single recipe that works, because each personality is unique. Some authors are very hands-off, while other are eager to go through numerous versions before settling on a final draft. My goal in these projects is to serve the author, helping their voice to ring powerfully with their God-given message. This usually means reading or listening to as much as I can from the author to learn their style, much like an actor will study their subject before playing them on screen. In the end, I consider the words I type as an offering of worship to God, meaning I care a lot about what the material looks like in the end.

4) You were in Haiti pretty soon after the earthquake. What impressions did that trip leave with you?

As I writer, I like to share what I see in print, but there are simply no words to describe what it’s like to walk where over 100,000 people are buried in a mass grave or to carry a young girl who is missing her leg. Tragedy was the norm, not the exception. However, I was also involved with several Christian organizations on the frontlines who were saving countless lives through medical care, water, food, and housing, all because of their love for Jesus. This, from my perspective, is the church at its best—showing love to those in need and letting your actions be the way that opens doors for communicating your faith. In fact, the church I visited while there had over a hundred new people two weeks after the quake, with many new people choosing to follow Christ. Even in the worst of situations, God is still at work.

5) You’re very passionate about the cause of human trafficking. Are Christians in America getting engaged in making a difference or are most of us still fairly unaware of this human tragedy?

My past trips to Haiti have opened my eyes to modern slavery and human trafficking. There, you can buy a person for as little as $50 U.S.  In my research, I quickly discovered the same problem was taking place in my own community and felt compelled to act. I’ve started to share what I’m learning and am now in the process of helping develop an aftercare center for former sex trafficking victims in the U.S. I’m not sure where this will ultimately lead, but when you discover there are more slaves now than any other time in human history, including in many of America’s major cities, it’s time to act. My goal is that five years from now, the leaders fighting trafficking in the U.S. will be people who love Jesus and live it out by standing against modern slavery in all its forms.