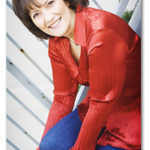 We’re privileged to interview  popular and bestselling author, Colleen Coble. Colleen writes romantic suspense and has won numerous awards across the publishing spectrum, including American Christian Fiction Writer’s Writer of the Year, Romance Writer’s of America, RITA award, the Holt Medallion, and many others. She has sold over 1 million books.

1) You have a rather dramatic beginning to your writing journey. Can you share that?

The phone rang late that night with the news that the oldest  of my three younger brother had been killed by lightning in a freak farm accident. In the coming months, as I emerged from the storm of grief, I realized that if I was ever going to follow the dream I believed God had put in my heart, I needed to get started. I was approaching my fortieth birthday, and time was marching on. As part of the grieving process, my husband and I made a trip out to Wyoming to see where Randy had lived during a two-year stint. As I stood on the parade ground at Fort Laramie, the first idea took root and sprouted. The fire of grief and adversity had finally cracked open the seed that had lain dormant in my heart all those years. It still wasn’t easy. Getting published is hard and takes work and commitment. Every time I was tempted to let the computer go dark, God whispered in my heart that I could do it. That he had given me everything I needed to go on. When a rejection came, I’d cry for a while. Then I’d pick myself back up, rework it and send it out again. Seven years later I finally made the first sale. But God taught me about faith and perseverance through those seven years. In those days I knew no other writers. It was lonely and soul-crushing at times. I’m so thankful for American Christian Fiction Writers and other authors whose friendships I treasure now after wandering so long in that wilderness.  Looking back, I’m glad it wasn’t easier. It makes me appreciate so much more the joy and privilege I have to share my novels with my readers and to hopefully make them a little thirsty for the One who holds out a cup of living water.

2) Writing is a calling and a passion, but its also a lot of work. What drives you to sit behind that desk and continue to pound out words, day after day?

I LOVE the writing process. The characters keep me awake at night, and I’m eager to see what is going to happen to them. I’m an organic writer–meaning a lot of the writing is seat-of-the-pants. I’ve tried plotting–really I have! But it strips the joy out of writing for me. I want to find out what is going to happen to these people in my head. So I love the process of discovery.

3) You have been pretty forthcoming about your health struggles, particularly migraines. How have you managed to write through all of that pain?

That’s been tough some years! I would have to catch my good days and write like the wind. On my bad days I might only get in 1000 words before I’d have to go to bed. But deadlines will do a lot to make you press forward!

4) You usually include a pet in one of your novels. Why is that?

Even the first story I wrote was about a horse that had twin colts. I love the connections that can develop between people and animals. I grew up with dachshunds. Our daughter has a dog wash/grooming shop in the Phoenix area and I get quite a lot of inspiration from her.

5) What would you say to that struggling writer, who has a manuscript in their hand and believes in the work, and goes to conferences and meets with agents, and yet still can’t get a contract?

Keep working! It took me 6 years to sell my completed manuscript. Don’t make the mistake I did though. Finish a book then move on to another one. Don’t keep reworking the same thing. The book you love will sell eventually. You learn to write by writing! Deep in the middle of the book you learn more and more about pacing and characterization. So finish the book and start another. And another. Keep sending out your work and don’t give up.