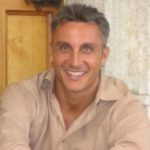 Its a great privilege to interview Tullian Tchividjian. William Graham Tullian Tchividjian (pronounced cha-vi-jin) is the Senior Pastor of Coral Ridge Presbyterian Church in Ft. Lauderdale, Florida. Tullian comes from a very famous family. He is the grandson of Billy and Ruth Graham.

I first learned about Tullian Tchividjian after reading his terrific book, Unfashionable: Making a Difference in the World by Being Different. Recently, I read his latest book, Surprised by Grace: God’s Relentless Pursuit of Rebels. (Read my review here) This is a terrific book that I highly recommend.

Tullian is also a contributing editor to Leadership Journal. He speaks at conferences throughout the US and his sermons are broadcast daily on the radio program Godward Living.

I’m grateful that Tullian stopped by to answer five questions for Friday Five:

1) I thoroughly enjoyed Unfashionable. I really think it spoke to today’s younger generation of pastors and Christian leaders about the tendency to want to fit in. Do you think this is a struggle for our generation?

Yes! Many well-meaning Christian’s have concluded that the best way to reach the world is to become just like the world. And so we become preoccupied with persuading the world around us that we’re cool, that we can “hang.” But I’m convinced that serious seekers today aren’t looking for something appealing and trendy. They’re looking for something deeper than what’s currently in fashion. New generations are thirsting for truthfulness, not trendiness. They long for someone to speak to them truthfully about a time and a place other than their own, about something and someone other than themselves. They want to know that there are different people out there who are willing to die for what they believe. That’s why, if you stop and listen, you’ll hear that the cry of our times is for something completely otherworldly. People are up to their necks in up-to-date structures and cutting-edge methodologies. They’re beginning to understand that modern capabilities cannot make us better and more satisfied people, nor make this world a better, more satisfying place. They seem desperate to recover a world that once was, a world that allows for mystery, miracle, and wonder—a world with windows to somewhere else. So, the point I make over and over in Unfashionable is that Christians make a difference in this world by being different from this world; they don’t make a difference by being the same. This is critically important, because in our trend-chasing world it’s tempting for Christians to slowly lose their distinctiveness by accommodating to culture. But by trying so hard to fit in, many Christians risk having nothing distinctive to say to those who feel, in Walker Percy’s memorable phrase, “lost in the cosmos.” In contrast, I’m calling this generation to embrace the delicious irony Christ demonstrated in bringing a message of God’s kingdom that subversively transforms both individuals and the world. Only by being properly unfashionable can we engage our broken world with an embodied gospel that witnesses to God’s gracious promise of restoration, significance, and life.

2) You’re latest book, Surprised by Grace covers a character in the Bible even secular people are familiar with, Jonah. So what was it about Jonah that you thought was especially compelling or new?

Surprised by Grace started out as a series of sermons on Jonah that I preached during the hardest year of my life. Preparing those sermons and preaching them proved to be a functional lifeline for me, not because of things I learned about Jonah (everything we learn about Jonah we learn by way of negative example), but because of things I learned about God’s amazing, sustaining, pursuing grace.

I learned that God’s capacity to clean things up is infinitely greater than our human capacity to mess things up. I learned about the “stubbornness” of God to accomplish his will, regardless of how hard we may try and thwart it. In fact, as I reflect on that painful season of my life now, I can honestly say that I am genuinely thankful for all the ache I experienced. For, it was during this trying time that God helped me recognize, through the story of Jonah, the practical relevance of the Gospel — that everything I need and long for, in Christ, I already possesses.

The theme of Surprised by Grace is that most Christians assume that the Gospel is something non-Christians must believe in order to be saved, but after we believe it, we advance to deeper theological waters. The truth is, however, that once God rescues sinners, his plan isn’t to steer them beyond the Gospel, but to move them more deeply into it. After all, the only antidote to sin is the Gospel — and since Christians remain sinners even after they’re converted, the Gospel must be the medicine a Christian takes every day. For me, it was through probing the story of Jonah that I came face-to-face with the fact that the Gospel is not just for non-Christians but also for Christians.

3) One the things that really struck me about Surprised by Grace is how you take the larger view of this book. Rather than just an interesting story in the Bible, you really feel it fully represents the gospel. Can you explain?

Jonah is a storied presentation of the Gospel, a story of sin and grace, of desperation and deliverance. It reveals the fact that while you and I are great sinners, God is a great Savior, and that while our sin reaches far, his grace reaches farther. This story shows that God is in the business of relentlessly pursuing rebels — a label that ultimately applies to us all — and that he comes after us not to angrily strip away our freedom but to affectionately strip away our slavery so we might become truly free.

For instance, in sending Jonah as his messenger to sinful Nineveh, God showed his boundless grace and faithfulness. But centuries later, God sent another messenger to sinful mankind. Only this messenger went willingly and joyfully because he knew the heart of God. In fact, he was the heart of God. He would be called “the Word” because he himself was God’s message–“He was everything God wanted to say to the world—all wrapped up in a person.”

Instead of fleeing from God’s call in rebellion and running away from his enemies, this new messenger ran toward his enemies, in full submission to his Father’s will, despite what it would cost him. For “we were enemies” of God (Rom. 5:10)—all of us—so much so that we rejected and crucified his Son.

Fully knowing that this death was his destiny, this new messenger nevertheless pursued God’s rescue mission with a totally engaged heart. “For the joy that was set before him,” the Bible tells us, he “endured the cross” (Heb. 12:2) so that God’s enemies, you and I, could become God’s friends.

Like Jonah thrown overboard, this new messenger would be a sacrifice, with the result that others were saved.

This new messenger, like Jonah, would spend three days in utter darkness. But unlike Jonah, he would emerge with wholehearted determination to pursue his enemies with life-giving love. He went on this mission because he wanted to—not because he had to.

When God’s mercy was shown to Jonah and to his enemies, Jonah was intensely angered. But this new messenger was the happy extension of God’s grace toward his enemies—not angry and embittered, but “anointed . . . with the oil of gladness” (Heb. 1:9). Jonah is all about self-protection; this new messenger is all about joyful self-sacrifice. No wonder Jesus says that he is “greater than Jonah”!

Jesus is the greater-than-Jonah who succeeded where Jonah failed. So, Jesus and His Good News rescue of sinners is all over this story of Jonah.

4) Do think American Christians can too easily be led into a Jonah-like emphasis on patriotism at the expense of our mission as ambassadors for Christ?

Yes! I think Patriotism has been one of the biggest idols inside the church in America, specifically over the last 35 years or so. Jonah refused to go to Nineveh primarily because of his patriotism and idolatrous nationalism. The Bible makes it very clear that God is on a mission to reclaim and replenish the cosmic order he originally created good—redirecting it back to himself in order to make “all things new” (Revelation 21:5). Therefore, God is not more interested in America than he is in other parts of the world.

5) You’ve been pretty candid about your own struggles, growing up in a famous family, experiencing a period of rebellion. What message would you say to 2nd-Generation Christians who are struggling to hang on to the faith of their parents?

My advice is short—beg God to massage the gospel deep into your bones. It’s only when you begin to truly grasp that every thing you long for and need—acceptance, approval, affection, security, freedom, meaning, purpose, rescue, and so on—you already possess in Christ, that you’ll be able to live life with boundless courage, audacious freedom, bold sacrifice, and heroic generosity.