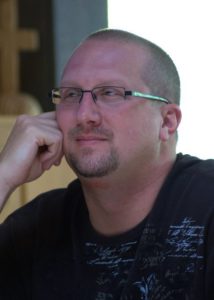 Every once in a while you meet someone who really knows and understands their craft. Dan King is that kind of person. Recently, I’ve gotten to know Dan, who is the proprietor of a unique Christian site, BibleDude.net. This is a really cool, interactive site with a variety of writers posting articles and blogs on all facets of the Christian life. Dan is someone who really “gets” the internet, social media, and the mediums that will shape how the gospel is communicated in the 21st Century.

King’s travels have included projects to numerous countries in Africa and to Haiti, as well as throughout the US in his efforts to share the love of Christ in practical ways. His corporate background includes work as a corporate training and adult education development professional for one of the nation’s largest telecommunications companies.

Besides serving as the founder and voice of BibleDude.net, Dan provides columns for ChurchDrop.com (a mobile technology site for churches and non-profits), and directs blogging projects for The Idea Camp (theideacamp.com). Most recently, along with Dillon Burroughs and yours truly, King cofounded the Activist Faith site (activistfaith.org), where he serves as media director.

As a Christian social media expert, King provides leadership to the High Calling (thehighcalling.org), a network of over 1,000 bloggers on faith, life, and work. His expertise has been noted in his columns for ChurchCrunch.com, one of the web’s top spots for church and technology issues.

King lives with his wife, Krista, and son, Samuel, on the Gulf Coast of Florida.Today Dan was kind enough to stop by for today’s Friday Five:

1) So how exactly did you become “the Bible dude?”

It was never something that I really intended to happen. I knew that I wanted to start blogging, and I wanted to find a cool, creative name that described what I was all about. Then I was at the mercy of what domain names were available. I really just considered myself an average dude in the church who was profoundly impacted by the Bible, and things like ‘church dude’ and ‘faith dude’ just didn’t sound right. So when I saw that bibledude (.net… .com was already taken), I new that I had my blog name. And I really liked the idea that I could only get .net because I considered myself just one piece of what I hoped would be a whole network of ‘bible dudes’. So actually, I consider myself a bibledude, not the bibledude.

2) How has God used this creative new ministry to communicate the gospel?

It’s been amazing. I went into it knowing that even if no one else ever read a single word of what I wrote, that it was still important for me to do it for myself. And I’ve experienced some incredible personal growth as a result of what I’ve written about. The exciting thing about it for me is that several other people have seemed to benefit from it as well! I’ve always tried to encourage and challenge other Christians in the same way that I am encouraged and challenged by the Word of God.

But the coolest thing about it is when I have the opportunity to tell the story about the work that I see God doing in the world today. For example, I got to be a part of an activity that some friends called a ‘love blitz‘. The blog post that I shared afterwards is one of those pieces that stands as a powerful testimony of God’s extravagant love being poured out on one family. When I’m able to share pieces like this, I see the Gospel being communicated in ways that reach, touch, and minister to people in ways that I’ve rarely seen elsewhere. It’s pretty cool to share stories like that!

Yes! And I’m really excited about this project/movement! Part of it is a book project with a couple of awesome dudes like you and Dillon Burroughs. I’m pumped to be co-authoring a book with you guys! And then there’s the website at ActivistFaith.org that we’re working on as an ongoing resource. But at least for me, the book and website are merely tools to support a movement, better yet… a move of God, that’s already happening. God is moving His Church to get out of their comfortable pews and go share the Gospel through their actions. I believe that God moves in this world through His people, and it’s exciting to be on the front lines reporting the stories and testimonies of where He’s working.

The best part about it that this movement is for everybody! It’s not just the seminary trained pastors that can have an impact, but it’s every person who’s heart beats to see Jesus change the lives of others the way that He’s changed our lives. And I feel like I represent that ‘everyday activist’. I’m just a dude (well, a bible dude) who has found ways to be a part of this movement. At the risk of sounding cliche, if I can do it, then I know that anyone can…

4) It seems this generation is so focused on activism. Combined with the power of the internet, what is the potential?

Oh man… it’s literally unlimited! I was on a trip to Haiti last summer. While I was there I was able to use social media tools to share real time to share what our team was doing. The amazing thing about it was that these real time updates allowed people back home (and literally all over the world) to interact with our team. They got to see photos within minutes of them being taken, and read live updates as they happened. What this meant was that for many in our home church who were supporting the trip in prayer were now able to pray for specific things that we were doing as we were doing them. Traditionally they would have only been able to offer general prayers. But now people were so engaged in the trip that they were able to send back very specific words of encouragement and prayers to the team.

Thanks to the internet and social media tools, we are now able to take the whole world on missions trips with us. And that kind of direct engagement has some pretty serious implications for sharing the Gospel for activists not only abroad, but also at home in local ministry. That’s something that gets me excited!

5) If you could give one piece of advice to someone pursuing an online ministry, what would you say?

That’s easy… focus on the conversation. And because conversation is a two-way thing, that means that we must listen as much as we talk. And don’t just talk ‘at’ people, talk ‘with’ them. Because technology tools aside, it’s still about people. The tools offer all kinds of new opportunities for people to connect, so we just need to make sure that we still focus on those connections.