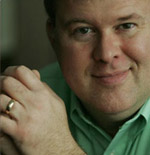 David Gregory is the author of the bestselling Dinner with a Perfect Stranger, which hit the New

David is a graduate of Dallas Theological Seminary. For man years he served as a writer and editor for Insight for Living with Chuck Swindoll. He was kind enough to stop by today to share today’s Friday Five:

How did your writing journey begin?

I came to this game late. I was forty before I started writing fiction. I was already a writer/editor of training materials and theological papers for a Christian ministry, I was in seminary, and I had just co-authored two nonfiction books with a couple of ex-pastors, which were well received. I took a creative writing class in seminary and thought that writing dialogue scenes was fun. There was some comparative religion material that I wanted to put into book form, and God gave me the idea of putting it into a story of a modern day skeptic having dinner at a restaurant with Jesus. That became my first novella, Dinner with a Perfect Stranger. I self-published it, basically just wanting it as a resource I could give to share the gospel. A major publisher got hold of it, though, and made a big hit of it, and all of a sudden I had a fiction writing career, something I wasn’t even aspiring to. The funny thing is, I’ve always considered myself the world’s worst evangelist, and God provided the opportunity for me to reach more people with the gospel than I ever could have dreamed of.

You personify Jesus in a fictional way in your novels. Some may take exception to this. How would you answer this?

I would say two things. First, God loves stories. The Bible is a story of his dealings with humanity. God could have written a theological text, but he didn’t. He chose to communicate through the stories of people’s lives. Jesus himself was much more of a storyteller than a theological expositor. I think he communicated through stories because he knew that’s what people would respond to. I see my writing the same way. I’m a nonfiction guy myself. Most of what I read is nonfiction. But a lot of people aren’t that way. They want to read a good story. I’m especially trying to reach people who would never consider picking up a piece of theological nonfiction, but love to read fiction.

Second, I always try to have what Jesus says be as biblically accurate as I can make it. In my stories I want to have Jesus communicating what the Bible, the New Testament in particular, is telling us. I always try to stay open to readers coming back and saying, “Show me where the Bible teaches that.” If I can’t show it, it shouldn’t be in my books.

Your writing portrays characters that may be religious, but to whom Jesus is a “perfect stranger” – Do you think this is true of many Christians?

The Apostle John makes clear in his first epistle that all true believers “know Him who is true.” So Jesus is not a true stranger to any believer in him. On the other hand, we are told to grow in the grace and knowledge of our Lord, and for many of us there’s a lot of growing to do on both counts! We have been steeped in legalism, or we have put ourselves on a performance basis with God, or we simply don’t really know the loving heart of the Father toward us. Certainly God doesn’t want to be a stranger to any of us—he wants us to know him intimately.

What future projects are you working on?

This month, I am also releasing as an e-book (and later as a print book) my first non-religious novella, called Patriot Rules. It’s in the same style as the Perfect Stranger books—heavy on the dialogue, and giving the reader plenty of concepts to ponder—but this time it involves time travel and the Founding Fathers. The protagonist, a politically active college kid, is given the chance to go back to the Constitutional Convention in 1787 and rewrite the Constitution as he sees fit. He does, and returns expecting a utopian paradise. Instead, the country is in shambles because of him.  The Founders give him a chance to set it right, but only after he travels back to the 18th century and meets with them in their settings to discover why they set up the government the way they did, and why, in its original design, it worked so well. I’m hoping readers will find it both fascinating and timely in this presidential election year.

If you could give one piece of advice to an emerging writer, what would it be?

Don’t give up hope if traditional publishing channels don’t work for you at first. My agent couldn’t find a publisher for Patriot Rules, which really surprised him. So we are doing it as an e-book. There are more ways to get your book out to readers than ever before. If your material is a good read, it will find readers eventually. But it may or may not find a huge distribution. You have to be OK with that. It’s a blessing to those that do read it. I’ve had books sell great and books sell poorly. The one book I wrote that was a finalist for a Christy Award, The Last Christian, didn’t sell that well. I had to accept that those people who did read it seemed to be blessed by it—that’s what they told me, at least. That is heartening. You can only be true to what God lays on your heart to write; you can’t control what becomes of it.

Posted in Books, Friday Five
FREE Resource: How to Read the News