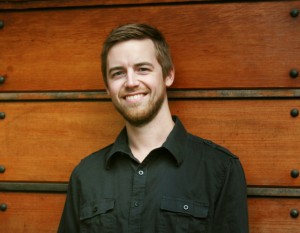 Tyler Braun is a pastor from Portland, Oregon, where he lives with his wife Rose. His first book, Why Holiness Mattters releases August 1st. You can find Tyler on Twitter, Facebook, or his blog, manofdepravity.com.
The title of your book is Why Holiness Matters, so in a nutshell, can you tell us why it matters?

So many of us have whittled down following Jesus to set of beliefs rather than a God who desires to apprehend us through his affection for us. First off, holiness matters because God calls us to be holy. Secondly, it matters because the full and abundant life promised to us in Christ is only possible as we journey toward living a holy life.

You don’t see a ton of books on holiness. Are we afraid of holiness or do we misunderstand it?
I’d say it’s most likely a bit of both for all of us.Our fear of it stems from wanting to keep parts of our lives separated away from our faith and relationship with God. We know that pursuing holiness has implications and we’d rather ignore them.

I think we misunderstand it as well because we believe holiness is something we have to do. While holiness does take action our own part, the first action is God toward us, not us toward God. While this is mostly just a re-framing of how we think about living the Christian faith, I think the re-framing has the power to change so much.

It’s encouraging to see a millennial writer discussing this subject. Our generation is know for a lot of things, activism, passion, etc. But holiness is not usually one of them. Depending on who you talk to Millennials are either the worst generation or the best generation in history. The truth likely lies somewhere in the middle. It probably isn’t completely fair for me to say this, but I think a lot of the blame for the lack of holiness in Millennials lies with those who have come before us.

Most Millennials I talk with know holiness to be a set of rules and behaviors that we have to follow. As holiness has been framed in such a poor way, Millennials have abandoned it rather than trying to fit into a system for holiness that didn’t make sense to them. This is why Millennials have often been known as hugely independent within religious circles. We haven’t engaged well with other generations but I also don’t think they’ve engaged us in a way that made holiness accessible in our lives.

You previously helped provide leadership for fatherless kids with The Mentoring Project. Explain why you were involved with this ministry and why it is so important. I have so many positive things to say about The Mentoring Project and the great work they are doing in Portland and in plenty of other cities in the US. The simple reason why I’m involved is because I grew up with a dad who I have so much respect for and I see the difference his involvement made in my life everyday.

When I spend time with any of the boys who have mentors through TMP it is easy to notice them growing more fully into who God created them to be. Often they start with a mentor as a shy boy lacking individual personality, but a mentor has the power to help them see who they are. We underestimate how powerful the affirmation of who we are, can truly be.

If you were to give one piece of advice to a millennial, what would that be?

Stop waiting for the life you’ve dreamed of to show up and go seek after the life God has set before you. In the midst of economic stagnation and rising education costs, Millennials have a large deck stacked against them and no one is giving away free handouts because they’re trying to protect their own first. It would be easy to settle for something far less than what God wants from us because of these dire circumstances.

As my friend Justin says, “take heart, we were made for these times.” I believe finding our calling begins in enter more fully into relationship with the God who works out His holiness within us. So my one piece of advice is to do that. Take one step closer to Him today. It might change your life.

Posted in Friday Five, Leadership, Life
FREE Resource: How to Read the News