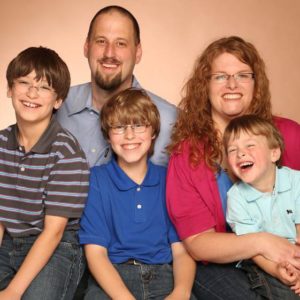 Today, it’s my privilege to welcome to the blog, Mike Lambert. Besides being our friends, Mike and his wife, Wendy and their three boys are also members of Gages Lake Bible Church and are missionaries with Trans World Radio. Mike currently works as an engineer with Shure, the microphone company. The Lambert’s have a terrific story. They came to faith in Christ a few years ago, began attending church and also listening to Moody Radio here in Chicago. They began to really grow in their faith as a result of the preaching and teaching on Christian Radio. Then, one day, Wendy heard an appeal from Trans World Radio about the need for missionaries to help bring the solid teaching of Christian radio around the world. Fast forward to today and Mike and Wendy are beginning their journey as missionaries for TWR. They will serve the Lord in Guam. Recently, Chris Fabry interviewed Mike and Wendy on his national radio show. I asked Mike if he’d stop by my blog so I could interview him here.

What was it that first motivated you to go into full-time missions? To be perfectly honest, I was pretty reluctant.  Wendy had heard about the need TWR had for engineering support on Guam and looked it up on line.  When she told me about it, I looked and thought “that looks perfect, except it’s a missionary position”.  I had never considered becoming a missionary.  I prayed about it for nearly a year.  During that time, I was constantly reminded of Guam and TWR’s need.  Finally, one Sunday in particular, the sermon was about Peter walking on the water.  I prayed what Peter said, “if it’s you Lord, call to me and I will come”.  I felt like he was saying to me “I think you know I already have”.  That was it, I went home that day and filled out the preliminary questionnaire.
It is quite a radical lifestyle change. Was that hard to get used to? Not really.  I really feel like we are doing what the Lord is leading us to.  Now that we are in this process of support raising and looking forward to starting our mission, I can’t believe I resisted it for so long.  I see now that I was trying to reach heaven while still holding on to the world.  Letting go and submitting to His will is very liberating, not to mention exciting.
Explain the work of Trans World Radio.  TWR broadcasts Christian radio programming in over 160 countries in over 230 languages.  Each year, they get over one million listener responses from around the globe.  From the station in Guam, the high powered short wave transmitters reach as far north as Japan and Russia, as far West as eastern India, and down into Australia and New Zealand.  China has one of the fastest growing Christian communities, but trained pastors are scarce.  To assist, TWR distributes Radio Church Kits to supplement radio broadcasts for China’s house church leaders. Each kit contains a radio, a Bible, and discipleship materials, carefully designed to ground Christian leaders in solid biblical truth.  In addition, they also broadcast a program called Seminary on the Air to help train new leaders.
Why Guam? When we interviewed at the TWR headquarters in Cary, NC, they asked if we were open to other locations or if we would only serve on Guam.  We told them we would go wherever we were needed.  Right now, the need is greatest on Guam for engineering support.  I recently saw a quote from the station manager on Guam that, in order to properly run a station that size, they need a minimum of two transmitter engineers.  Currently, they only have one.  That is one person on staff to respond if a transmitter goes down, or if there are problems keeping them from getting their signal out to the 1+ billion people in their broadcast area.  That is why there is such a critical need there.
Most people don’t understand the lengthy process of getting to the field. Can you share that and how individuals and churches can help? It has been quite a journey so far with the application process, screening, interviewing, and training.  Support raising can be the most challenging part, though.  We need people and churches to partner with us to help us reach people for Christ.  To learn more, people can see our TWR staff page.
*The Lamberts are currently raising support for their mission to Guam. If you’d like to consider supporting them, please click here.
Posted in Friday Five
FREE Resource: How to Read the News