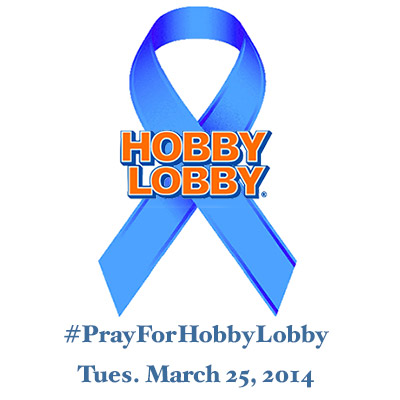 Tomorrow is a consequential day in the history of religious liberty. The United States Supreme Court is taking up a case involving two Christian-owned businesses: Hobby Lobby Stores and Conastoga Woods. Hobby Lobby, of course, is the most prominent of these two companies. The conflict is this: can the government compel a business to endorse things against conscience? Hobby Lobby is being compelled by the government to pay for abortion-causing drugs that violate the deeply held beliefs of its owners.

The the center of this argument is a long-cherished virtue: that the government should not trample on the conscience. We should support Christian businesses, not only because they often help fund Christian mission, but also because they are living out the gospel in the marketplace. So I’m hoping you’ll the ERLC and other followers of Christ to pray specifically for Hobby Lobby tomorrow. If you do, use the hashtag: #prayforhobbylobby. Here’s a sample prayer guide you might use;

​Here are some more excellent resources:

Posted in Culture
FREE Resource: How to Read the News