Good Men Are Hard to Find: Lessons from the Life of George H.W. Bush 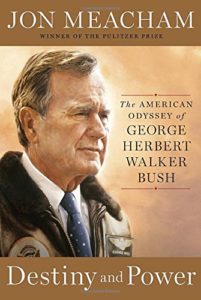 I just finished reading Jon Meacham’s magnificent biography of the 41st President of the United States, George HW Bush, a book I thoroughly enjoyed, from cover to cover.

Bush’s election to the presidency in 1988 was the first presidential election I paid attention to. I was ten years old, already a budding politics and history nerd. We huddled around the radio in our family room that November night (our family did not own a TV) and waited to hear the returns.

George HW Bush was in the arena during much of the pivotal history of the 20th century. His father, Prescott Bush, was a U.S. Senator. He volunteered to fight in World War II and became a fighter pilot whose plane was shot down over Chichi Jima. He and three others survived, but not after he finished his bombing mission, parachuted into the waters of the Pacific, and was rescued by a Navy submarine. When he returned home, Bush married Barbara, built an oil business in Texas, then got involved in politics. He won a seat in Congress, then ran for the Senate and lost. He served in a variety of roles in government: Ambassador to the United Nations, Ambassador to China, and Director of the CIA. He was the Chairman of the Republican National Committee. He was considered for the Vice-Presidency twice: in 1968 with Richard Nixon and in 1974 with Gerald Ford. He ran for President in 1980, lost to Ronald Reagan, and then was asked by Reagan to join the ticket. He served as Vice-President for 8 years before seeking the presidency and winning in 1988. Born just after World War I, Bush lived through the Great Depression, World War II, Korea, Vietnam Korea, the turbulent 60’s, Watergate, the assassinations of JFK, RFK, MLK, the fall of Communism, the Gulf War, the Iraq War, 9/11, the digital age, and much more. He saw two of his sons become governor and one become President. His life is a fascinating prism through which we can study the 20th century.

Reading this book was a pleasure on many levels. I enjoy, thoroughly, biographies, especially political ones. But more than this, I came away with several reflections on leadership and life. I thought I’d share a few with you.

1) You don’t have to be a monster to be a consequential leader. There is a narrative, fueled by the stories of men like Steve Jobs, that to be effective, one must be a tyrant: thoughtless, selfish, ruthless. Even among Christian leaders, this idea exists and is rewarded. George H.W. Bush demonstrates that you can lead at the highest levels of society and still be a kind and decent man. For Bush, his decency was something he was taught by his mother, but nurtured throughout his life by discipline. He refused to hold grudges, to settle scores, or to not be kind. He was prudent and deferential, often subsuming his own ambition for the good of those he served and for the good of the nation.

As I read this book, it reminded me of the fruit of the Spirit described in Galatians: gentleness. It’s a similar trait described in Titus 1 and 1 Timothy 3. Gentleness, is not weakness. It’s not avoiding conflict or about being nice. It’s a steady disposition and a genuine concern for those who are affected by your decisions. It’s modesty, a kind of selflessness. Today common decency is neither taught nor rewarded. This is why men who are both powerful and gentle are hard to find. But for Bush, a man who led well, it was in abundant supply.

2) Sometimes your best and most lasting work will go unnoticed.  When the history of the end of the Cold War is retold, giants like Ronald Reagan, Margaret Thatcher, Lech Walesa, Pope John Paul II, Vaclav Havel and others are often (rightly) given credit for its demise. What goes unnoticed, however, is the vital role Bush played. It was during Bush’s presidency that the Berlin Wall fell and Germany was reunified and during his presidency when many former Soviet Republics gained their freedom. The end of the Cold War could have had a bloody end, but for Bush’s careful diplomacy and steady leadership.

Bush also assembled a coalition to push Saddam Hussein out of Iraq and presided over a hugely successful mission. His refusal to take out Saddam at the time seemed weak, but, in history’s hindsight, seems prudent given the struggles the U.S. has had in restoring stability in a post-Saddam Iraq.

There were many other similar crises over which Bush presided, both at home and abroad, that went unnoticed, but were evidence of careful leadership. And yet, until recently, most have not considered Bush a consequential president. He’s often lost when people discuss the 20th century’s greatest leaders. This reminds me that much of good leadership is done behind closed doors, when nobody is paying attention, on matters that often seem unimportant to the outside world. If our sense of service is fueled only by getting credit for what we do, by being noticed, we’ll not lead well. But if we are committed to faithfulness, wherever we lead, our leadership will have more lasting impact.

3) You can lead well and still love your family. To study the Bush family is to study a family deeply devoted to each other. George Bush often wrote touching notes to his children during times of crisis. He was, for them, a source of encouragement and strength. His kids adore their father. To hear Bush talk of his love for Barbara (He calls her “Bar”) is to hear a husband who deeply loves his wife, over the many seasons of life. George HW Bush was an ambitious, accomplished man and yet he didn’t sacrifice his kids.

As a husband and father, reading this book was, at times, sobering and convicting. It forced me to think through my faithfulness to my family and to ask hard questions of myself. Sadly, many good leaders are a mess at home. It doesn’t have to be this way. It shouldn’t be this way.

4) There is no substitute for experience in leadership. It struck me, as I read this book, that George HW. Bush may be the last President elected with a long record of public service. He may have, arguably, been the most experienced person to hold that office. This served him well, especially on foreign policy as he leveraged relationships with government leaders he had forged over decades.

Today such a resume is considered a liability, not just for Presidents but for leadership positions at all levels, including in the church. We are a culture obsessed with youth, with charisma, with raw talent. There is something to be said, of course, for young leadership. Maturity is not always tied to age. Sometimes young leaders have a prudence and vision beyond their years. Paul told Timothy to not let the church he served “despise his youth” (1 Timothy 4:12).

However, we should wise not to make youth and attractiveness the singular desirable quality in those we seek to lead us. In those moments of crisis, when leadership is difficult, those who’ve led before often have a reservoir of life experience to guide them.

5) Men plot and plan, but God is gathering history to himself. I have this thought after every Presidential biography I read. Reading history only reinforces to me the sovereignty of Christ over history. Bush’s life is no exception. But for a few inches left or right, he could have been killed while being shot down at sea in World War II. Had Richard Nixon made Bush a White House staffer instead of ambassador to the U.N, Bush’s career may have ended with Watergate. But for a few choices and mistakes and turns, he might have defeated Ronald Reagan and won the presidency in 1980. Had former President Gerald Ford accepted the offer to be Reagan’s running mate in 1980, Bush, the second choice, may not have ever been elected president 8 years later. Had a few historical events gone differently or not happened at all, we may have never known who George HW. Bush is.

The sovereignty of God, over history, shouldn’t drive us to either fatalism or passivity. We should live out our God-given callings with intentionality and purpose, but knowing that in the swirl of history, both in the world and in our own personal lives, there are no accidents and no coincidences. Nothing happens that doesn’t pass through the hands of a wise and perfect God.

Update: I can’t believe I forgot to mention that I’ve been to the George H.W. Bush Presidential Library in College Station, Texas on the campus of Texas A&M. I highly recommend the visit.

Posted in Book Reviews, Culture, Leadership
FREE Resource: How to Read the News